Hey everyone. Hope you guys are had a great weekend. I myself have been lazy and failed to write a post for this week. So, I’m going to do a little babble and then go get some rest.
What kept me busy this week was working on revisions for the next book I will release. (Not Hidden Wolf) I’ve also been busy trying to come up with release dates and such for next year. Man, I can’t believe that October is upon us already.
Wish you all the best upcoming week and remember:


Let your imagination soar when you read.
Posted by Anything and Everything Paranormal Blog at 3:00 AM No comments:

Pleased to announce the upcoming release in the Human-Skinned Wolves Series. 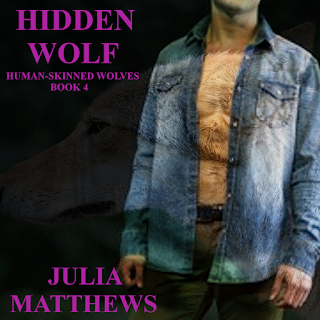 Hidden Wolf will be available for pre-sale on Amazon in October 2016 and goes live on December 21, 2016. In other words, the e-book will make a perfect Christmas Gift.

Hidden Wolf Blurb
Jameson Moon’s father abandoned him and his mother at the request of another woman. He gave them plenty of money to live on, but a major part of Jameson’s life was missing. One day, it all became clear when seven talking photos came to life in his head. Resentment and anger lived deep inside Jameson, but the truth increased it tenfold, creating a sense of ease at having to eliminate his father to achieve his destiny. Or, so Jameson thought.

Back Up – Flash Fiction

Hey everyone,
Sorry for the later post, but I spent all Saturday cleaning and got nothing else done. Still I like how this short scene worked out. Enjoy it and remember:
Let your imagination soar when you read.
Julia
THIS IS AN UNEDITED PARTIAL SCENE
ADULT CONTENT
M/M CONTENT

Something cool and soft pressed against his back and a hard piece of metal met ground into the top of buttocks. I had no idea what was going on, but could feel the throbbing of a second gun. I remained frozen in place, something George will curse me out over. My lover of ten years taught me how to defend myself against attackers. He swore his undercover position for the FBI would come into our home. I never believed it, but looked like I would have to apologize to him about that. Someone held me against the wall with a gun stuffed in the front of his jeans.
“What . .  What do . . “ Calm down. Shit. Don’t be a pussy when it matters the most. I hated violence of any kind. The mere thought of having to harm another living and breathing item made me sick. It’s why I ate only veggies, fresh fruit, and beans. “What do you want?”
The pressure holding me to the wall faded, but I remained still, with my face pressed into the chipped gray paint. Time for some repairs. I loved remolding. George would grip and groan about me putting him to work, but the moment his shirt left his body, I’d make it all up to him. That we both loved. Shit. What am I thinking about? My opportunity to fight back had been given to me.


“Back up, but remain facing forward.”
Posted by Anything and Everything Paranormal Blog at 6:56 AM No comments:

Hi,
Hope all had a great weekend. I’ve been busy working on an unexpected round of edits on book 4 of the Human-Skinned Wolves Series. Also, put out a short video that I thought everyone would like. Less than a minute long. Hope you all take a quick look at it. It shows the recipe Adam Williams, Father Creator of the Human-Skinned Wolves, used to cure his seven sons. Check it out here. My goal is to have the release date, cover, and blurb for Human-Skinned Wolves up by mid-September. In the meantime, enjoy this week’s flash fiction scene.
Remember:
Let your imagination soar when you read.
Julia

* * *
UNEDITED SCENE
M/M SEXAUAL CONTENT
ADULT CONTENT
* * *
“Tonight is the night.”
Caleb ran his moose covered hands through his hair, making sure the spikes shinned. Ralph loved them when they were stiff and glimmering. Everything had to be prefect, starting with his hair and ending with Ralph’s favorite dish, baked spaghetti with no onions, but extra mushrooms.
“You about ready in there?” Kathy’s hearty chuckle pulled a deep huffed from him. “You are only going to complete the one thing mom and dad always feared us both doing.”
“Doesn’t matter what they want.” Caleb yanked the door open and spread his arms. “Well? Will he go for me?”
Kathy ran her eyes over his entire body, making him squirm. How could he not, his sister, the one who basically raised him since his mom was fifty-five when he was born, was one second away from telling him if he was going to win his lover’s heart for the rest of his life.
“Perfect.”
Caleb exhaled and tugged Kathy into his arm. “Thanks, sis.”
“Tonight is going to be perfect.” She pulled free from him and knocked a stray piece of lint from his shoulder. “Ralph is going to be shouting yes so loud mom and dad will hear him in Hawaii.
“Hope not.”
“Me to.” Kathy snorted. “Prefer not to have mom calling me and telling me just how pathetic of a job I did raising you.”
“Why is she so . . . dead set on us not getting married?”
Kathy shrugged. “Not sure. She’s been with dad going on sixty years.”
“Doesn’t matter.” Caleb wrapped an arm around his sister’s shoulder. “I’m going to be engaged to Ralph tonight and then me and you will be able to plan our double wedding.” The idea warmed every inch of his body. “You sure Shelly won’t mind?”
“Sure of it.” Kathy stopped in front of the door and gave him a sideways hug. “I’m out of here. Enjoy your night and remember . . . keep the noise down. We don’t need Mrs. Henry complaining again.”
“Hey!” He smirked at Kathy. “That was your and Shelly’s doing. Not mine and Ralph’s.”
“Ture.” She winked at him as she shut the door behind her.


Matter of an hour and he would be entering the next phrase of his life. If he didn’t ruin all his hard work by burning supper. He sprinted off to the kitchen, pulling the pan out of the oven just as the doorbell rang.
Posted by Anything and Everything Paranormal Blog at 3:00 AM No comments: