Flash Fiction – One set of parents

Hi,
Hope all had an amazing weekend. Sure was nice around my area. Hot for sure. This week's flash fiction didn't really come from any specific thing or idea, it sort of just sprang to mind. Hope you guys like it.
Remember let your imagination soar when your read.
Julia
* * *
Unedited Scene
Adult Content
* * *
What’s going on? Where are . . . “Anyone?”
Caleb spun around in a circle taking in the charred grass, the white looking ash fluttering from the darken sky. What had he missed? He’d only fallen asleep a . . .
“Wow.” There was no way. He’d laid down at midnight. There’d been no frat party at the house last night, so why did his watch still say midnight.
“Bit confused there, son.”
Caleb jerked around with his fist up. He might be out of sync, but he knew how to box. He didn’t have the championship title for no reason.
“Who are you?”
“Good question. Better one is, who are you?”
What the . . .
“Better than that, do you know who your parents were?”
“Of course.” Mitchel and Ray-Lynn raised him into a wonderful church going, respectable man.
“Not your adopted one. Your biological ones.”
“I have one set of parents, no matter whose blood runs in my veins.” Ray-Lynn Tumberland had tried for years to get him to forgive the woman and man who’d dropped him on their doorstep an hour after he was born. He just hadn’t been able to and what did that have o do with the earth being destroyed.
“Understand how you feel, but I can enlighten you a bit more on your birth and why you are no longer on the Earthly Realm.”


Hi,
This week I’m taking a break from the flash fiction and doing a bit of promoting.
Wolf Club
Human-Skinned Wolves Book 3
Is releasing
June 21, 2016 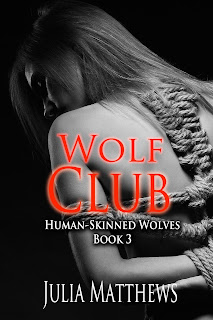 Eighteen years ago Calvin Moon’s life spiraled down some kind of wolf hole. His birthright was stolen when Phantom Creek invaded, killed his fathers and lover, and secluded him into his club. Calvin allowed Phantom to think he’d achieved the seclusion, but in reality Calvin came and went as he wished, biding his time until everything fell into place. Who would’ve thought it would come in the way of a battered woman, showing him how appropriate refusing to reconnect his relationship with his ex-submissive and his best friend, Thomas, was. Or was it?

Hope you all pre-order your copy. (inset link) Like all my books it will be in Kindle Unlimited.
Pre-order link:
You all have a great week.
Remember let your imagination soar when your read.

Flash Fiction Scene – Take It Back

Hi,
Hope all had an amazing weekend and that this week has started off with a bang. This is one of those scenes that sort of just jumped out at me when I sat down and let my fingers fly across the keyboard. Hope you guys enjoy it.
Have a great day.
Remember Let your imagination soar when you read.
Julia
* * *
Unedited Scene
M/M Content
Adult Content
* * *
Travis couldn’t believe it. His best friend’s brother stormed into the middle of the biggest meeting of his life and shouted for him to take it back. Travis wasn’t sure who or what Jacob Timberman was shouting about, but he did know the business investors he’d been pitching a merger to did not appreciate the interruption.
The head board member was rushed and four mercenary looking men surrounded him. Travis knew the big shot guy had brought bodyguards after some kind of attack a few weeks ago.
“I mean it. Take it back and do it know.”
“Mr. Kingman,” the next to top head guy spoke through gritted teeth. “Care to explain what is going on?”
Travis took a breath and moved around the table with the biggest, false calm face he could pull off. “I’m not quite sure, Sir, but I’ll find out.” He took hold of Jacob’s arm and tugged him into the hallway. Jacob didn’t seemed phased by the tight hold he had on him, because he kept trying to break free to go back into the office.
“What the heck is going on?” Travis hissed at Jacob. “You are blowing a major deal for me. What are you doing here?”
Jacob went to step around him, but Travis blocked his path. “You aren’t going back in there and if you don’t’ calm down I’m going to have security escort you out.”
“The heck you will. He has to take it back.”
“Who?”
“Uh . . .” The rich smooth voice of Mr. Kive, the head board member had Travis spinning around.
“I’m so - -“
“Don’t apologize.” Mr. Kive gave him a tentative smile. “This is my doing and Jacob’s brash actions is . . . Might not have been his smartest choice of actions, but I have to admit it sure showed me how ballsy my lover could be when he feels harmed.”
Travis was still lost, but if Mr. Kive was taking blame for Jacob’s action then at least his chance at the merger wasn’t a total loss cause.
“Could I bother you for a use of a separate conference room for a few minutes?”
“Sure, Mr. Kive.” Travis waved his personal assistant over. “Take them to the other conference room and make sure no one bothers them.”