The week of December 24- December 29 there will be no post. I am taking that week to be with family.

I wish you all a Happy Holiday, Merry Christmas, and a Happy New Year. enjoy your time with family and friends.

Julia
Posted by Anything and Everything Paranormal Blog at 12:00 AM No comments:

Hi,
Hope all had a great week and read some amazon stories. This week’s Flash Fiction Scene is another one of those that I’m letting my mind take control and writer whatever comes to mind. There is no prhase or scene creating my idea.
Hope you all have a wonderful week and enjoy the last few days before Christmas.

Hope all has been fine over the last week. Mine’s been busy. I got the book Revealed By Love up for pre-release. It will go live on Kindle and in Kindle Unlimited on Jan. 1m 2018. (Lord is it truly weeks a way?) With that being setup and ready to go, I’ve been focusing on editing another revised book of mine. But . . . Today is Flash Fiction Scene. Not sure where this came from, but it came to my mind and I had to get it out , so I could move onto some more edits.

Hope you enjoy this week’s scene and remember to
Let your imagination soar when you read.
Julia
* * *
Note This is an unedited scene
M/M ADULT CONTENT
* * *
Randal shook His head. His mouth had to be hanging open. What he witness was inhumanly possible. No one could turn from a tall, muscle bound man into . . . What was . . . “Scott?”
The large black dog . . no, what stood in front of him wasn’t a dog. It was larger than a wolf. What had Scott turned into.
The area around Scott began to fade red, as it had minutes ago, and consumed the massive animal’s body, leaving behind a naked Scott kneeling.
Randal found himself speechless. Who wouldn’t when the objective of their eyes finally stood naked in front of him. Man sure lived up to Randal’s image of him. He shook his head. Wasn’t time to focus on the broad shoulders. Tight chest muscles that remain motionless with each breath Scoot took. Wide smooth back blocked Randal from seeing what he’d long to stoke, swallow, and feel thrust into him.
“Randal?” Scoot stood fast, fluently and rushed over to him.
Damn, his cock was thicker than any other he’d seen over the last ten years of being an out Gay man. Better yet, it was more an anaconda. How could it not be? Scott’s dick was firm and waving at his stomach. Wait . . . Firm? Nope. Scott was aroused.
“Randal, talk to me. Are you okay?”
Hands feathered across his chest, around his head, and down his arms.
“There’s no outward marks, but did that beast break skin anywhere else?”
Scott knew Randal was asking a question, and from the way he kept gawking over Randal’s skin he was scared for some reason. The other larger than normal wolf had charged him, but Randal nailed him in the side before he could get with an arms length. He was fine, more than. The most majestic sight stood in front of him, devour him with his eye, even if Randal  only did so to ensure himself his best friend had not been harmed.
Fingers snapped in front of him. “Hey,” a hand lifted his chin.
“What?”
“I need you to tell me if any skin was broken?”
“No.” Randal’s eyes drifted back down to the much longer and purpling cock swaying free in front of Scott.
“What are . . . Shit.” Scott’s hands covered his privates. “Sorry.”
“Why?” Randal reached out and took hold of Randal’s wrist. “I liked what I was seeing.”
“You was?”
“Boy, yes.”
Scott let him tugged his hand free and took a step closer. “What would you do with it?”
“Lots of amazing activities could come with me manhandling that beauty.” His hand slid around and down Scott’s cock, pumping him twice, getting a loud moan out of him. “You like.”
“God, yes.” Scott thrust into his next stroke. “You have the perfect hands for that.”
“Have the perfect mouth too.” Randal winked at him. “I would take it all the way down my throat. “Take all the hard thrusting you could send my way.”
Scott groaned, pressing his chest out.
“Bet those nipples of yours love to be tortured as much as your cock.”
“More than.” Scott leaned in, stopping only when his lips were a mere inch away from him. “Can I?”
“I’m yours.” He had no idea why he was going down this path with his best friend, but it felt right. Not like Scott hadn’t been the man haunting his dream since he turned eighteen.
“That you are.” Scott was a hair away from his lips when a loud rumble filled the air.
Scott spun around, growling back, but it stopped before it took on a full force rumble. “Sorry, Sir.”
“No. I’m sorry.” The tallest man Randal every saw strode up to them.
Randal stepped in front of Scott, pushing him backwards.
“I mean your mate no harm.”
“Mate?”
“Ah,” the stranger nodded. “You have not had time to fill your mate in.”
“No, Sir. I’m sorry, Sir.”
“No reason to apologize.” The man crossed his arm. “We caught the rouge five miles from here.”
“Great. Did you find out why he came after Randal?”
“You.”
“Me?”
“Scott?”
“Yes. He believed Scott was encroaching on his man.”
“What? I never . . .”
Scott wrapped an arm around him. “I know, baby. I know.”
Baby? Oh man. As much as Randal loved where things had been going a minutes ago, being called baby, by Scott kind of poured a bucket of water on him. He had longed for Scott for years, but never believed he had a chance. Then, Scott was doing more than giving his chance. He was openly declaring affection for him.
“You okay, Baby?” Scott’s hand brushed across his stomach.
“I will leave you two. It seems you still have some major explaining to do.”
“Yes, Sir, I do.”
Randal liked that the man was leaving, but he wasn’t sure how much he would like to hear whatever explanation the man mentioned.
“Let’s take a seat.”
Randal squared his shoulders and walked over to the fallen log, sitting down and patting his lap. “To protect your skin.”
“I . . . For this it would be best if I sat beside you.”
Okay, he’d changed his mind again. Looked as if the thrill of the moment was gone and he was going to be rejected by his best friend. Shit. How would he manage to be at his besties side after he kicked him to the side.
“Hey,” Scott tilted his head, placing a light kiss over his dry lips. “I want to be in your lap, but I want us both to have a level head while we discuss us.”
“Us?”
“Yes. Us.”


“Okay. Let’s get down to it.”
Posted by Anything and Everything Paranormal Blog at 12:00 AM No comments:

Revealed By Love by Julia Matthews 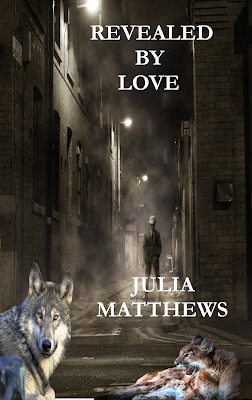 
Detective Walt Bell made decisions all the time, that changed people’s lives. Never once did he think he would be facing the one in front of him. He’d thought leaving the Haven Society Hive had been the worst one he’d face in life. Fate must have other thoughts. The one that loomed in front of his Bear Therianthropy ass could put him in a major bind. What was he to do? How was he to respond? Sure not like he had for the last two weeks. Sitting on his ass and watching.
Posted by Anything and Everything Paranormal Blog at 2:30 PM No comments:

NaNoWriMo is over and for the fourth year in a row, I won. That means that I know have three stories ready for revisions. Looks like next year might be a great year for me when getting books ready for publication.

Still, that is next year. This is still 2017, meaning I have to focus on now, and right now, it is time to write a scene. Phrase for the week is Stuff it. One I hope you enjoy and one that allows your imagination soar.

Have a great week.
Julia

Raphael took another look around the place he’d called home for the last ten years. The Combs had been in his life longer than anyone else. He loved them. They told him they loved him. Lies. All lies on their part. Raphael had loved Mr. and Mrs. Combs. They’d been there for him during the most trying times of his life. His mother’s death. His grandmother’s rejection. His father’s point blank denial of him. He never once saw an ounce of prejuicde in them. Why did they? How could they? He was still the same human. Same young man. Same person who came to their door when he was eight years old.
“Raphael, man, you ready?”
No. He was no ready to leave the one place he felt safe. Not that he dreaded moving in with Jake. He loved Jake. The two of them had spoken many times about them taking their relationship to the next level, but Raphael had not expected it so soon. He’d wanted to finish college first.
“Come on, man.”
Raphael reached up and let his hand rest against Jake’s cheek as he rested his head on Rapael’s shoulder. “I can’t believe this.”
“I know man, but they made their selves clear.”
Boy had they. The moment Mr. Combs came in and found Raphael kissing Jake, the entire atmosphere had shifted from loving and caring to rage and disgust. The two had words, harsh and unforgettable words, but the last words Mr. Combs had said to him was the cruelest and drifted through Raphael’s mind every other second.
“We should have sent you back the day you arrived.”
Raphael’s entire body had stiffen and his mind spun so fast he had no clue what he said next. Not until two hours later when Jake held him in their beds. He’d came back at Mr. Combs with two words. “Stuff it.” Not the most original, or hardcore, comment, but the only thing that Raphael’s rattled mind could think of. Nothing left for him to do. They’d made themselves clear. He had one hour to pack up his clothes and photos of friends and leave their home.
“Your hour is up.” Mrs. Combs said from the top of the steps.


Raphael squeezed Jake’s hand and turned toward the door. He had no idea where his life would go from there, but at least he had Jake.
Posted by Anything and Everything Paranormal Blog at 12:00 AM No comments: