Taking a pole. Want to help me out.

Looking for more way to connect with my readers, and had a question thought some of you might like to help me out.

What I’d like is for each of you to either comment here or email your response to julia.matthews5@gmail.com.

1 1)    Would you like video of an author introduction, bio’s, and even once in a while video blogs?
2)    Would you be interested in audio book version of my stories?
3)    What other kinds of interactions do you like with author’s?

You can answer as many of these as you’d like.

Thanks in advance for any help.


Julia Matthews
Posted by Anything and Everything Paranormal Blog at 7:33 AM No comments:

Back cover description for Claiming My Mate, Book 3 of Journey Series. 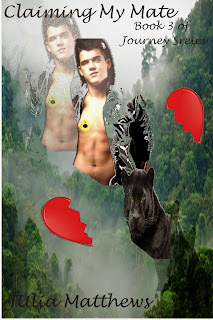 For forty years, Robert and Dragon lived separate even though they are Mother Earth mated. Both secretly wanted the other.

Robert felt it impossible. Three reasons at first, now only one. A seer indirectly tells Robert, to fix his life, dive into his past. Robert listens, only finds lies and secrets. Will this help or hinder his chance with Dragon. Will Dragon forgive him or toss him to the side.

Dragon’s deadest his Mother Earth mate isn’t getting away from him again, at least, not without an explanation. Problem is, he only knows his name. Can he locate him? If he does, will it only to be rejected again?
Posted by Anything and Everything Paranormal Blog at 9:31 AM No comments:

How does a book grow into a series?

Series come to each person differently. Like with the Journey Series. Book 1, Journey To A Mate, was co-written with Vickie Matthews. While we wrote that story, ideas sprang to life in my mind how to further expand areas we had written. I jotted those ideas down, created a short layout of each story. From that point we decided I would continue on the series.

So, with Journey To A Mate there had been no inkling of idea of a series, till we had gotten that book started. Now, some of my ideas that have hit, I automatically knew had to be a series. Not just because they were loads of stuff going on, but to emphasize what I want to get across. (none of these are yet published) So, like with most writing, series grow in different ways to each writer.

Some knows from get go. Sometimes a book starts out and turned into two, three, or more books. You can even write the middle book of a series before the first one. Of course, starting at the end, and working backwards can be fun as well.

No matter the case, each series has it’s own growth pattern and needs to be nourished like a child.

Hope all has an amazing week.

Don't forget to keep an eye out for the back cover description of Claiming My Mate, Book 3 of Journey Series.

Posted by Anything and Everything Paranormal Blog at 4:23 AM No comments:

It’s getting closer and closer. Before I know it, November 22, 2013 will be here, and so will the third installment of the Journey Series. Claiming My Mate. The cover for it is ready for everyone to preview. Hope all likes it. 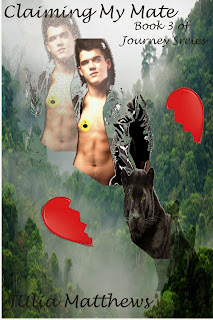 Thanks to Fotolia.com, where I bought the copyrights to use the photos to create the cover.


Remember I love input on what my readers think. Can reply in many ways. The blog is only one. Don’t forget to checkout my website, www.juliamatthews.webs.com (which has direct links to my Smashwords Profile, Amazon Profile, and Goodreads Profile), and my Facebook page https://www.facebook.com/jujumatt . Email: julia.matthews5@gmail.com.

Have a great week,


Julia Matthews
Posted by Anything and Everything Paranormal Blog at 5:24 AM No comments:

With the upcoming release of Claiming My Mate, Book 3 of Journey Series, I thought it would be perfect time to give an update of the entire series.

If you read the series you know it don’t fit into the norm of series. Or not at least any I’ve read or know about. Book 1, Journey To A Mate, falls into the adult paranormal romance genre. Book 2, Anything For A Mate, and Book 3, Claiming My Mate (releasing November 22, 2013) falls into the M/M Adult Paranormal Romance genre. That’s not the only difference.

Most series these days are standalone series. Journey Series isn’t so much. Reading book 1, would leave you wanting to know more about a couple of areas. Book two digs deeper into those areas and opens up a few more questions about close friends of the King and Signer family. Book three expands the King and Singer’s journey, and we come one step closer to finding out what the overall journey for them is.

Before book 2 released I posted a blog about that told how the book idea had hit one way, but by the time I wrote the second one, it had changed direction. It happens more than any readers realize. At the time of that post, I was expecting there to be five full novels in the series. Well, with book three wrote and about to release, I’ve realized that there’s only going to be four novels. Still debating whether or not I want to write a novella about Miss Donna. Not completely ruled it out yet. One other thing has come clearer to me. There most likely will be a spin off series. (That’s not a locked in idea yet, just go some ideas flipping around and around in my head.)

Like with any series, and with any writer, you never know when or what will spark a new idea, or change laid out plans. All any writer can do is let their creativity lead them. So as for this minute, the Journey Series looks like it will consists of four novels and maybe a novella. That’s not saying it will remain that way. Still got another entire novel to write, and see what comes of it.

Don’t forget to keep a look out for all updates on the series, as well as all new information about the upcoming release of Claiming My Mate, Book 3 of the Journey series. Cover and descriptions will be released soon.

Hope all has a great week,
Julia Matthews
Posted by Anything and Everything Paranormal Blog at 6:01 AM No comments: