Hope all had a great week. Mine was a bit up and down, but I managed to complete my Camp NaNo writing challenge of 25,000 words. I actually wrote 30,000+ words. I still have another 2-4 chapters to complete the story I was free writing on. Looking forward to finding out the ending to the story. It sure took a different twist than I expected. It went down its own path like rolling steam from a shower.

That thought is what led to this week’s flash fiction scene. Hope you enjoy and remember:
Let your imagination soar when you read.
Julia

* * *
Note This is an unedited scene
ADULT CONTENT
* * *
I wiped sweat off my forehead, cursing the obnoxious hot water. I’d wanted a cool shower to evaporate my steam rolling emotions, not one hot enough to create more steam.

“You going to listen to me?”

Did Cal really think I cared what he had to say? I didn’t. Wouldn’t. Never again.
“Please, Bethany, please listen to me.”

Nope. If I had, he would have ended up curled in on himself screaming at a higher pitch than a man should even make. He still might have if I saw him again. Thankfully, for him at least, and maybe my knee, the steam covered shower blocked my view of him.

“Leave.” I reached through the shower curtain, snatching up my towel.

“Will you let me explain myself?”

“Why should I?” She ran the lavender scented towel up and down her arm. “You accepted a transfer without asking me if I wanted to move to Texas.”

Texas of all places. Desert. Heat. Extreme heat. Southern talk. Cowboys. Okay, that part might have been okay. Cowboys wore tight ass jeans. Or the ones in the movies did. She wouldn’t have minded seeing Cal in a pair.

What was she thinking? Cal had accepted a position in Texas. Without asking her? He knew how she felt about hot weather. It’s why they lived where there was a limited amount of hot days. More than she liked, but not so many she suffocated to death on them.

“It was that, or I lose my job. Completely.”

I jerked the curtain aside. “Well, you have lost your wife. Completely.” She stepped out, knocking him aside and marching into their bedroom for the last five years.

“You serious!” Cal’s words came out squeaky, but his anger lurked in them.

“You would throw away our marriage because I chose my job?”

“You did not consult me on such a major decision.” She slung her towel in his face and jerked her underwear on. “You made a life changing decision without even asking my opinion.”

“I had to decide then. Not like I wanted to.”

“You will not get it. Will you?” She threw her hands up in the air.

“You will not either, will you?” He sighed. “They did not give me time to call you. It was answer them then, or they took the offer to Frank.”

“Then you should have told them no.” She tugged her grown over her head. “Sleep on the couch until you leave for Texas.” She tossed her hands at the door. “I’m going to bed.” She threw the covers back and crawled under them.

“Fine.” Cal marched out, muttering about how this was not over.
Posted by Anything and Everything Paranormal Blog at 12:00 AM No comments:

Hope all had a great week. Mine was busy. I’m taking on the Camp NaNorWr Challenge. My word goal for July is 25,000 free written words. I’ve made it past the halfway point. Yeah. Soon as I reach that goal I will be returning to editing Collar of Truth, Human-Skinned Wolves Book 5. Still got lots of work on it. That’s is why this week’s Flash Fiction Post is a short one. Literally.
* * *
Note This is an unedited scene
ADULT CONTENT
* * *
Rex growled, letting his wolf surge forward, which did little to ease Rex’s displeasure in his Alpha. Alpha’s were supposed to keep peace among the Pack, not promote violence between two of his subject. Specially, not the Gamma and the Omega. Something had to be done. An Omega was to be revered, not tortured. He could not stand by and watch. Beta’s had the right to step in, but he was supposed to have permission first. Unless . . .

Shanna’s shout with right through his body, but he could not hold his wolf back. He was in mid-air for only a second before his massive gray wolf slammed into his Alpha.
Posted by Anything and Everything Paranormal Blog at 12:00 AM No comments:

Hope all had an amazing week, last  week. Mine was a busy one. Camp NaNo started July 1st, so I’ve been working on some new material, while editing on Collar of Truth, Human-Skinned Wolves Book 5. The exhaustion that built up in me while doing both I what inspire this week’s flash fiction scene. Hope you guys enjoy and remember:

Let your imagination soar when you read.
Julia
* * *
Note This is an unedited scene
ADULT CONTENT
* * *
Tap. Tap. Tap. It as all I had heard since I walked through the door. It drowned out the squeak of my shoes against the freshly waxed floor.

“Will you hurry up. We are going to be late.”

Late. Who cared? All she would do is donate more of the hard earned money I made. She loved to spend the money, but despised me to throw her behind on her arrival to all her rich-scuk ass friends. Nope. It was my job to bring home enough money to keep her living the high-social life she grew accustom to the day we said I do. Worse decision of my life. Don’t get me wrong. I love my wife, but I hate how snobby she has become.

I knew she did. If I made her one minute later, she would have a cow when we got home. Not something I could afford. I still had at least four hours of work to do after the benefit. If I didn’t get it done then I would not be able to get Mr. Coffee out of his murder charge, meaning I would never get paid, meaning she would have less money to spend.

“Ready.” I tightened my tie and tugged my sleeves down.

She came up to me and fake kissed each of my cheek and then gave me a light kiss on the lips. “You look amazing.”

Those were the small moments that I looked forward to since I said I do. No matter how aggravated I get at being rushed or working so hard, it was those times that she dropped into the soft, sexy tone that drew me to her the first time I saw her standing in the line to the portable, green bathrooms at the Park Festival.

Hi,
Hope all are ready to celebrate our freedom and those who serve and have given their lives inorder to keep those freedoms for us. That is sort of what today’s flash fiction scene is about. However, the idea for this scene came from a mythical photo I found on Pinetrest.

Have a great week.
Remember, let your imagination soar when you read. 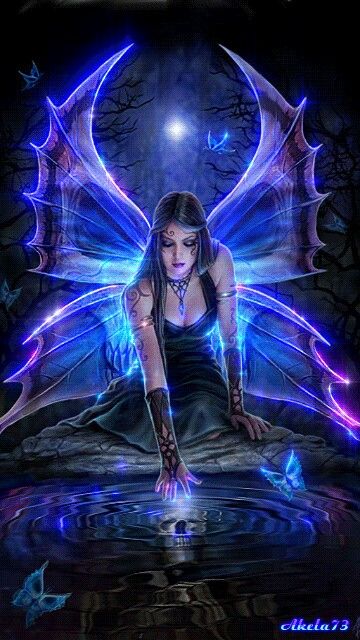 Ray hovered over the pool of freedom, soaking up the energy that her forefathers had generosity given their lives for. Each year the current leader of the Energy Fay, sacrificed his life eldest son’s life. Her family had six souls buried inside the depth of the pool of freedom. Kind of made her happy that she was not a male, then again . . .

He knelt beside me, taking my hand away from the pool. “It is not wise for you to keep visiting the pool.”

This was a conversation they’d had for the last two weeks. His answer hadn’t explained why since the first night, and Ray doubted tonight would be any different.

“You do not need to know why.” He tugged her up and tucked her under his arm. “Daughter, you are not the one that will give your life for our people.”

“Then there is no reason for you to come here?”

“My son will one day join our ancestors. I want to know where and how the pool of energy gives us the freedom from the Gray Witch.” More than that. I wanted to know why I would have to sacrifice my eldest child one day.

I did. My future had been predicted two weeks ago by the All-Seerer. She had searched me down while I was cleaning my wings and drew me aside and informed me that my destiny had been decided. Not a fact that every daughter or son of the current leader earned. No one knew why some received such a gift and others did not.

I wasn’t sure it was a gift. I might have been better off not knowing that I would come out victorious in the Battle of Leadership that took place each year. Other words, I would defeat my father and take his place.

“You are not going to tell me more than that, are you daughter?”

“Good.” He hugged me tight and gave me a light push towards my tent. “Get some sleep and do not let me find you at the pool again.”