There was no real inspiration for this week’s post. Simple came to my mind after doing some revisions and free writing. Hope you enjoy and remember,

Let your imagination soar when you read.
Julia

Oranges changed to red and red changed to yellow as the clouds parted, revealing a blue morning sky. It’d been a long time since she’d seen the son. Hundred years to be exact.

“I remember the first day of my one hundred mark. I had little respect for what came with that day. I hope I have trained you well enough that you do not suffer as I did.”

She spun around and threw her arms around the man who had been her father figure since the day some strange man decided it best for her to become the living dead instead of going to the afterlife to join her husband.

“I promise not to let the new found powers to go to my head.”

“I hope you keep that in mind as you find the joys that is now your new life.”

Being able to live in her own place. Out from under the thumbs of the man the Vampire Council deemed responsible for her. Shane had never once complained or treated her harshly. He had done his best to teach her everything she would need to know for the day she turned one hundred. Took long ass time for a made vampire to gain control of her natural desire for control. Not to mention the stamina to survive in the sunlight. To learn what skills had been passed to her by her sire. Hers was a bit harder, since she had no idea who had made her. She had to wait for each of them to appear. Lucky for her and Shane she only got two skills, but they were the rarest for her kind. Mental communication with humans and vampires, and the ability to fly in human form. All vampires could change into a bat, but few gained the highest talent known to the vampire world.

“Where will you be going first?”

“Karen, I assumed you had this entire day planned out.”

“Understandable.” Shane nudged her shoulder and lifted his hand, shaking a set of keys. “These are for you.”

“They get you into your new place.”

“Ready to have me out of your hair.”

“Not hardly. Won’t have anyone to clean my place.” Shane grinned at her. “Seriously, I seen that you were not making plans and I wanted you to have a place to call your own. Consider it a gift.”

“Thank you.” She hugged him and kissed his cheek. “Guess it’s time for me to give you your place back to you. Sure you are going to have a huge parade of women coming and going since I’m out of your hair.”

“You should.” She patted his cheek. “You are a handsome man and deserve a life full of happiness.”

“One day. Maybe.” He stepped back from her and gave her a small bow. “Take your leave my child.”
Posted by Anything and Everything Paranormal Blog at 12:00 AM No comments:

Hi,
Hope all had an amazing Easter. Mine was full of food and family time. Also snuck in some writing. Not sure where this week’s phrase comes from, but I hope the little bit of time I spent (and I do mean little) provided a bit of fun or entertainment for you all.

Remember let your imagination soar when you read,
Julia
* * *
Note This is an unedited scene
ADULT CONTENT

I bit the furthest corner of my cheek as Eddie marched back and forth between the kitchen sink and stove. Five steps each way. Didn’t seem to bother him one bit. Would have me. Pacing required a large distance. Specially, when everything else was closed in on him.

“Charge in. Storm the gates. Man the ceiling. Hold the rifle.”

“There is no way I said hold the rifle.”

“I think your exact words were, ‘Charge in. Storm the gates. Man the ceiling. Hold the rifle.’”

“Why would I say such stupidness?”

“Don’t know. Made about as much sense as Old Man Oxford calling me up and telling me it was time for me to place my free quote.” I’d yet to figure out what the old jackass was spouting on about. “Sure seemed to register with you. Care to fill me in.”

“He did not say that did he?” I nodded at Eddie. “My grandfather swore by the saying.”

“Stupidest thing I’ve heard of.” Eddie brushed his hand across his mouth. “Old Man Oxford referred to the old battle phrase “Free Quote to the dead.”

“Never heard of it.”

“Me either until my grandfather swore that if you knew your death awaited you that you called the other leader and gave him headsup of sorts.”

“Yes. By Old Man Oxford relaying the message for you to place your free quote he is letting you know he expects to die at your hands, so he giving you permission to name a price on his head.”

“Price on his head? I do not want his head. For nothing. He did not dishonor me or my family. It is up to you to price his head. Not me.”

“Yes.”
Posted by Anything and Everything Paranormal Blog at 12:00 AM No comments:

This week’s flash fiction phrase came about while I was watching a show I missed on Demand. LOL. Funny where things to life at. Hope you enjoy this week’s post.

Remember let your imagination soar when you read.
Julia

“Life sucks.” He kicked his shoes to the side and yanked his shirt over his head.

A flicker of light blue caught his eye. He moved to the side of the room he’d avoided for the last five months. Since the night Detective Joe Ringer, whose dark hair matched the darkness he brought to the doorstep of unexpecting lovers.

Kyle’s firehouse caught a late shift call. Dispatch had told his team it was a simple barbeque pit fire call that filtered over onto some grass. Dispatcher screwed the team from the get-go. The fire had been for an apartment building fire started by tenant building his own fire-pit for a child’s first birthday party. Fire spilled out onto the grass and quickly spread to the building, enlightening the bottom floor. Someone had stored a propane tank on his back porch. It blew, engulfing the entire back part of the apartment. By the time Kyle’s crew arrived five other buildings in the complex had caught fire. Kyle and his crew jumped into gear, pulling one right after another. The last time Kyle went into a building he never . . . That had brought Ringer to his doorstep dropping the worse news he could have brought to anyone.

He shook the horrific memory away as he fingered the neon blue set of beads him and Kyle had gotten on their last vacation together. A better time in life. One he wished he could rewind back to each morning instead of waking up to an empty bed, that send him fast forwarding to a bleak and barren life that had become his and would remain his until the day he took his last breath.
Posted by Anything and Everything Paranormal Blog at 10:19 AM No comments:

Hi,
This week I’m writing a scene based from this photo. 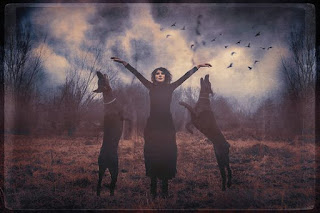 Hope you enjoy what comes from this unique photo.
Remember Let Your Imagination Soar when you read.
Julia
* * *
Note This is an unedited scene
ADULT CONTENT
* * *

Been a long time since the feeling had consumed my body. My arms lifted up, newly formed pups following like pros. Birds flocked to the ripples of warmth flowing from my body. The clouds formed a bottle of white puffy mist.

Excitement increased the intensity of the flow of power rushing up my legs, arms, and out the tips of my hair. The dog’s breath brushed the tips of my fingers as the pull of the earth’s core roasted the grass around me.


The voice sounded smile and far away, but I knew who had approached me before he arrived. Saul came rushing the minute he’d felt one of his followers pull on the coven’s power. There were few who could, and he hated when they did so. There would be hell for me, but showing him I could proved to him that he had competition for his seat among the coven.
Posted by Anything and Everything Paranormal Blog at 12:19 PM No comments: